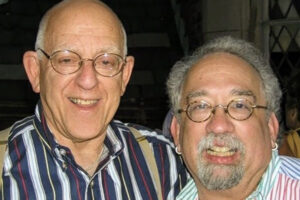 Temple Beth-El’s mission and responsibility is for congregants and visitors to feel welcomed, included, and comfortable. We embrace diversity in all its forms, including age, gender, color, sexual orientation, interfaith partnerships, and the full spectrum of Jewish background and observance. We welcome those with physical, emotional, or intellectual disabilities. We are enhanced by our diversity and are committed to building our Jewish community together.

Part of our inclusion effort is our Gay and Lesbian Inclusion Committee (GLIC). Their programs are designed for LGBTQ, their families and friends, and are not limited to members of Temple Beth-El.

GLIC was formed more than three decades ago and was the first committee of its kind in Reform Judaism. It followed the formation of the UAHC’s (now the Union for Reform Judaism) then Greater New York Council Gay and Lesbian Resource Committee by Temple Beth-El members John and Herb z”l Hirsch-Leiman who had already become leaders in the Reform Movement. From the beginning, Dr. John Hirsch-Leiman has been the chair of both of these committees.

Dr. Hirsch-Leiman z”l became a national spokesperson for this inclusion, serving on the national board and becoming the cochair of the Gay and Lesbian Taskforce (later a part of the URJ’S Department of Jewish Family Concerns) of the Union. He coedited the first Kulanu: A Handbook for UAHC Congregations. This book significantly chronicles Temple Beth-El’s journey to complete inclusion.

Read more about GLIC’s history in our Shema magazine, beginning on page 25.

Jewish Links for the LGBTQ Community